​Mississauga First Nation is situated on the North Shore of Lake Huron.  The southern boundary of the territory is located near the Trans Canada Highway (Hwy. 17), approximately 130 km east of Sault Ste. Marie and on the west boundary of the Town of Blind River. 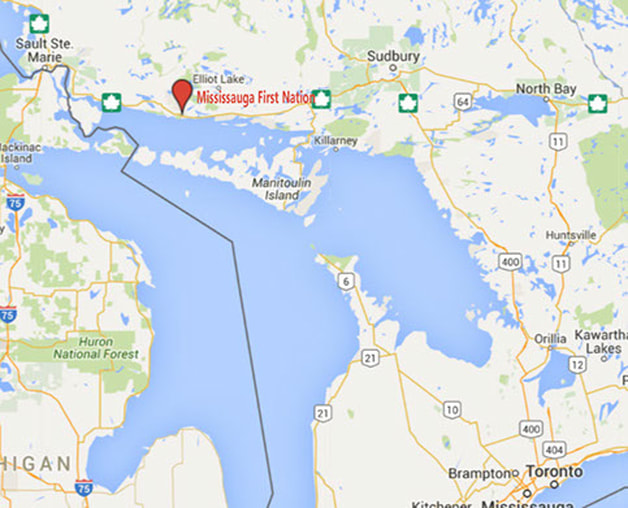 The present reserve consists of 1,977 ha of land located West of the Town of Blind River and is situated entirely within Cobden Township, District of Algoma.  A Land Settlement Agreement (April 1994) increased the territory to a total of 18,172 ha. The land is accessible by road from Highway No 17, located near the South boundary of the reserve, and from Highway No. 557 on the Northeast end of the Reserve.
Land Code

The Council may, subject to the terms of the Land Code, make laws respecting all aspects of its lands.  Land laws are made and published in the same way as by-laws.

The Lands and Natural Resource Committee assists and advises Chief and Council with respect to:
i) development of the lands administration system,
ii) matters respecting the Mississauga First Nation land,
iii) developing laws, resolutions, policies and practices respecting the management of the Mississauga First Nation land,
iv) land issues and disputes arising between members and Chief and Council,
v) coordinating and overseeing community approvals under the Land Code.

Land related rules, procedures and polices, once approved by Chief and Council and ratified by a community vote, will be implemented by the Lands and Natural Resource Committee.

A land use plan is a long-range (typically 20 years) and broad-based policy document that deals with the existing and future use of lands in the territory.  It contains policies and maps to guide growth and development and sets out the First Nation’s vision for the future.  A secondary benefit of a land use plan is that it functions as a catalyst for discussion of land use issues in the community.

The primary purpose of a land use plan is to provide guidance for land use decisions.  Instead of resolving issues on an “ad hoc” and reactionary basis, decision makers will be able to:
​
Competing priorities, such as economic development, cultural sustainability and environmental protection, can be reconciled based on agreed-upon policies.  The land use plan, through is accompanying policies, provides certainty and helps to ensure that decisions are understood to be made impartially and transparently.